Skip to content
History
Mary MacKillop and her connection to Kincumber

Mary MacKillop and her connection to Kincumber

The story of the Kincumber site begins with the original owners of the land, the coast Darkinjung people of the Darkinjung Nation who for many thousands of years utilized the rich resources of the “King Coimba Creek” later Cockle Creek, today known as South Kincumber.

The Spirit of Mary MacKillop also has special significance to the site and to the whole peninsula.

The Sisters of Saint Joseph have maintained an important link to Kincumber since “Mother” Mary and the Sisters first established this site as a home for boys in 1887. The area has  been designated by Gosford Council as Mary MacKillop Peninsula in 1996.  Mary MacKillop established an institution for the poor and destitute at the Rocks in Sydney. This institution was known as St Josephs Providence.

The Establishment of Kincumber

In 1887 the presbytery and grounds at Kincumber were placed by Cardinal Moran at the disposal of the Institute of the Sisters of Saint Joseph.  Dean Sheridan made the necessary arrangements for 3 Sisters and 22 boys to take up residence at Kincumber from the Providence in Cumberland Street.  In 1889 an adjoining block of 30 acres was purchased for 300 (pounds), on the financial advice of Dean Sheridan.  Later Dean Sheridan assisted the Sisters to acquire a further 100 acres, land that was known as “Killarney” and “Tara”. Gradually more land came under cultivation.

In the 1880s this area was still quite isolated and most goods were transported by water.  The boys had to learn the skills of living and working for a country life.  The work of farming, dairying, gardening, baking and carpentry was some of the early work they were trained in.  With unemployment high in the cities by the 1890s the intention was also that they would grow up skilled and be able to find work in the country.

From 1887 until 1966 the site of the St Joseph’s at Kincumber was a Home for Boys established by Mary MacKillop and the Sisters of Saint Joseph. In the early sixties the site was used solely for retreats and in most recent times St Joseph’s Kincumber is a modern conference and retreat centre. 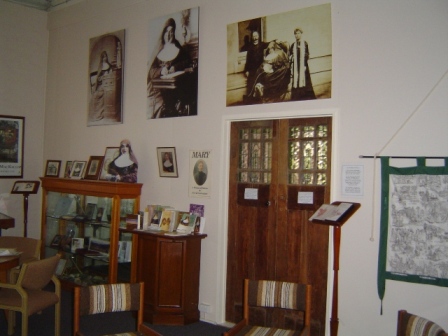 The picture below shows the original wharf at St Joseph’s Home for Boys. The Sandstone building can be seen in the background and to the right is one of the original buildings which is no longer standing today.

The water down the “avenue” is the boatshed and wharf area. This wharf was used by many boats but particularly St Joseph’s Pioneer Ferry Service run by the Sisters and manned by the boys, in operation from 1905 until 1960’s. The concrete stairs that lead down to the wharf near a small gate, are the original stairs that were used as the entrance to the Home from Brisbane Water.